Thank You for Being a Friend (Golden Girls) 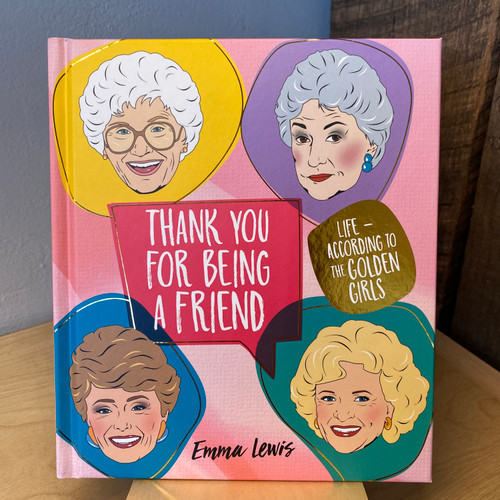 Thank You for Being a Friend (Golden Girls)

Everything you need to know about life, according to the fearless wisdom of The Golden Girls’ Dorothy, Rose, Sophia, and Blanche.

More than thirty years after it first aired, The Golden Girls retains a steadily growing cult following. The show ran for seven seasons (collecting a staggering fifty-eight Emmy nominations and eleven wins along the way), and over the years, this hit comedy about four fierce and sassy broads sharing a house in Miami charmed millions of viewers with its wit and verve and, most of all, the strength and quality of the friendship between its four iconic characters.

Featuring fun and colorful illustrations throughout, Thank You for Being a Friend brings you the ultimate wisdom of Dorothy, Rose, Sophia, and Blanche. Find out which Girl is your true spirit animal with the “Which Golden Girl Are You?” quiz; get sex and dating advice from TV’s greatest vamp, Blanche Devereaux; and master the art of the witty zinger with Dorothy. There are cheesecake recipes for the perfect midnight snack, Golden Girls bingo, profiles on each of the extraordinary actresses who brought these incredible characters to life, and the Ten Commandments of shared house living.

Full of inspiration, fashion advice, makeup tips, trivia, and hilarious quotes direct from the lanai, Thank You for Being a Friend is here to help you discover the secrets to maintaining the lifelong bonds between friends who are more like family.

Little Letters of Thanks

Am I Overthinking This?